This summer has been wonderful!  The kids had a blast, and I had a much needed break from the hustle and bustle life can bring. Summer was filled with great vacations, visiting family and friends, and just relaxing.

One vacation was extra special to us, not just because we were together as a family, but because our hotel — the Henderson Beach Resort in Destin — made the experience worth writing about. Destin is about 5 hours from our home, so it wasn’t a difficult drive with the kids.  My in-laws met us there in their RV and stayed the entire time to hang out with the kids, which was great and gave me a lot of time to myself! God knows I needed it! The outlet mall is not far from the hotel, so I took advantage of that for 3 days straight.  The Johnston & Murphy and Saks Off Fifth outlets were wonderful.  We also met some friends and their kids at a local water park, which was also close to the hotel. The Henderson Beach Resort is in a great location, and I will be back for our next stay in Destin.

The hotel is owned by Sheila Johnson, co-founder of Black Entertainment Television (BET).  The hotel is beautiful, there are so many amenities, and the staff goes “above and beyond” in every way. Visit website here: https://www.hendersonbeachresort.com 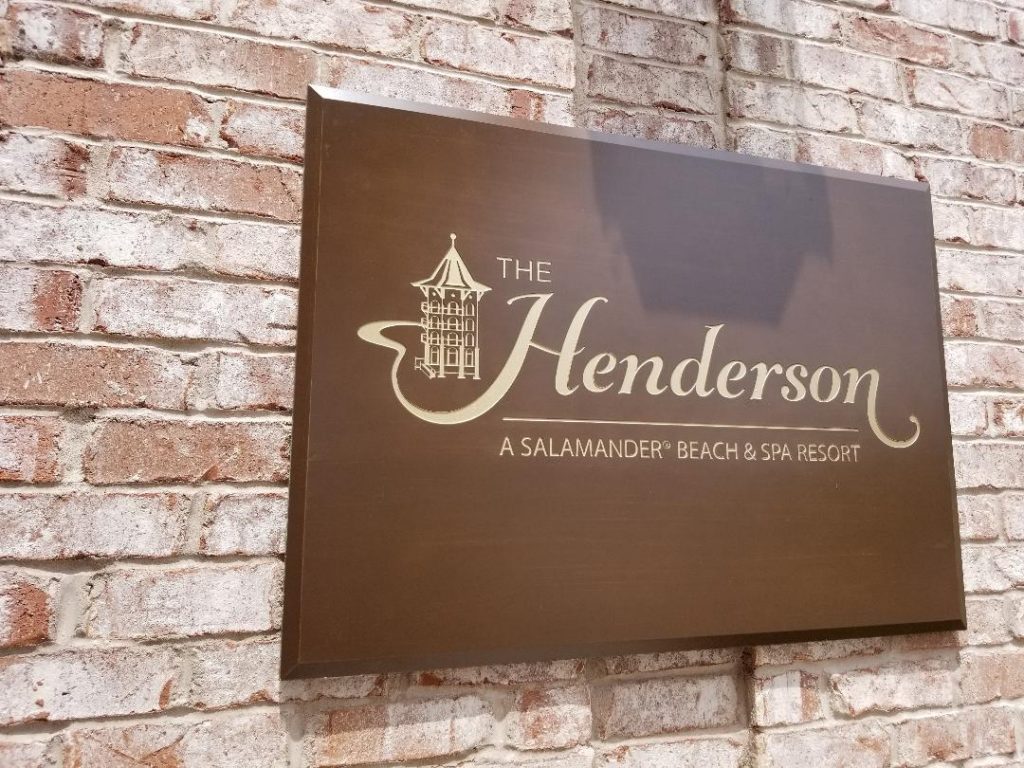 Johnson’s hotels are known as “Salamander Hotels”.  In her article with Smart Meetings, she notes that the salamander can regenerate damaged or missing body parts, and mythically could walk through fire and survive.  She stated that although she had money (she’s listed as #21 on Forbes’ 2016 list of America’s Richest Self-Made Women), many banks would not give her a loan because she was a woman.  Her ability to overcome and make things happen is amazing. I had no idea that she is part owner of the NBA’s Washington Wizards, the NHL’s Washington Capitals, and the WNBA’s Washington Mystics.

I admire her resolve and determination to dispel society’s views of “what a woman should be.”  My mother-in-law was told that she should be a teacher in the 60’s, but she became a biologist for Tulane’s Primate Center instead during that time and shattered the glass ceiling.  Instead of being what society thought she should be, she went on to become what she wanted to be.

View of the resort from the beach 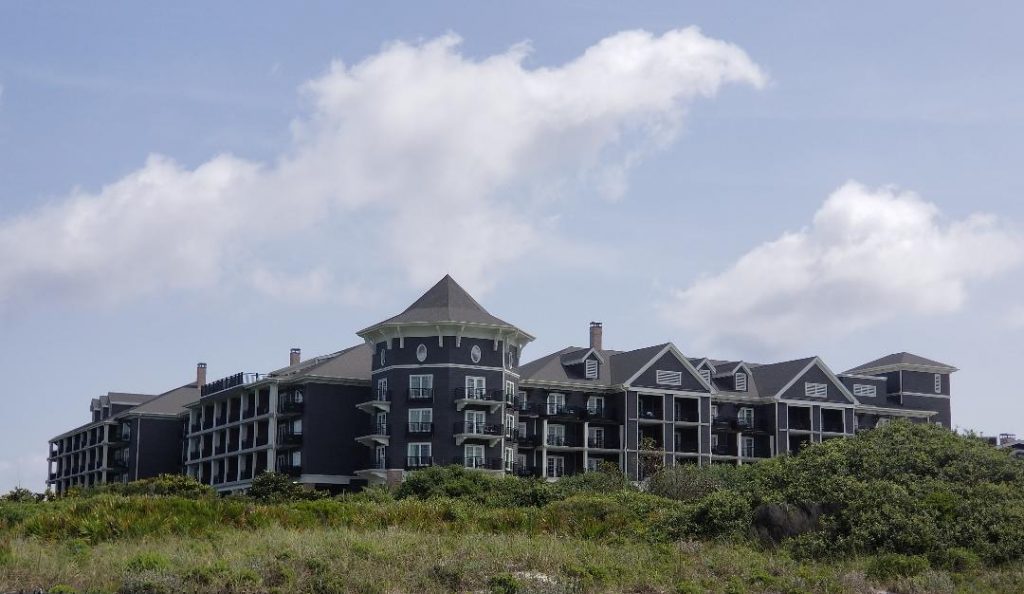 Entrance to the property 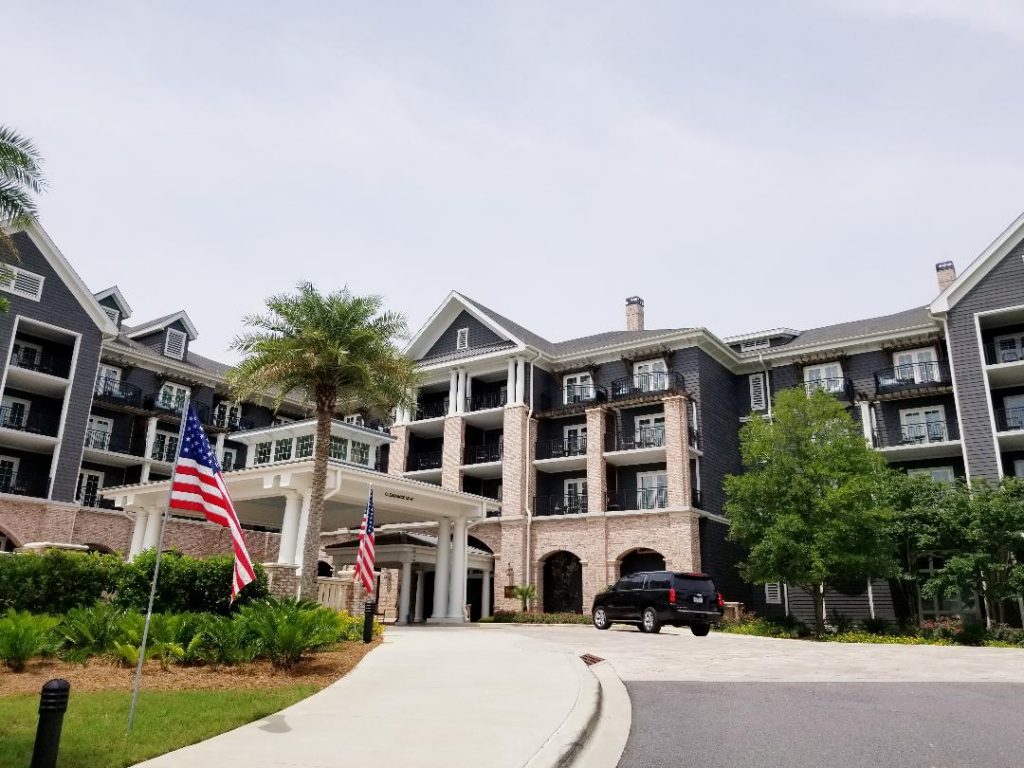 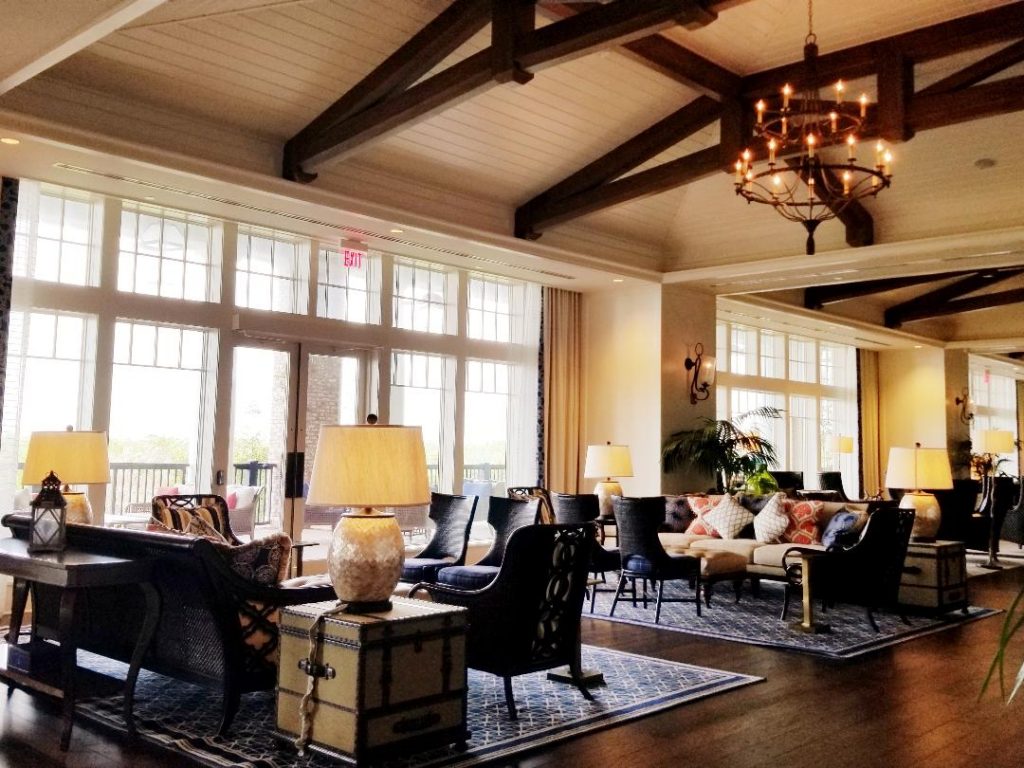 Sitting area as you exit the lobby 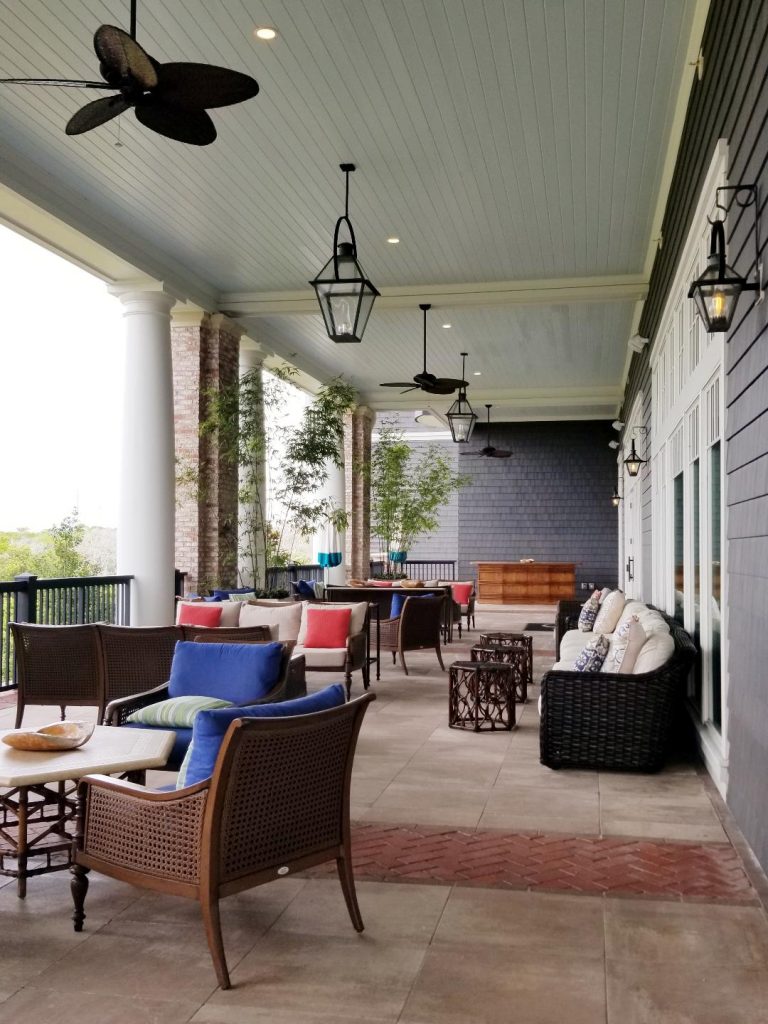 Views from the outdoor sitting area 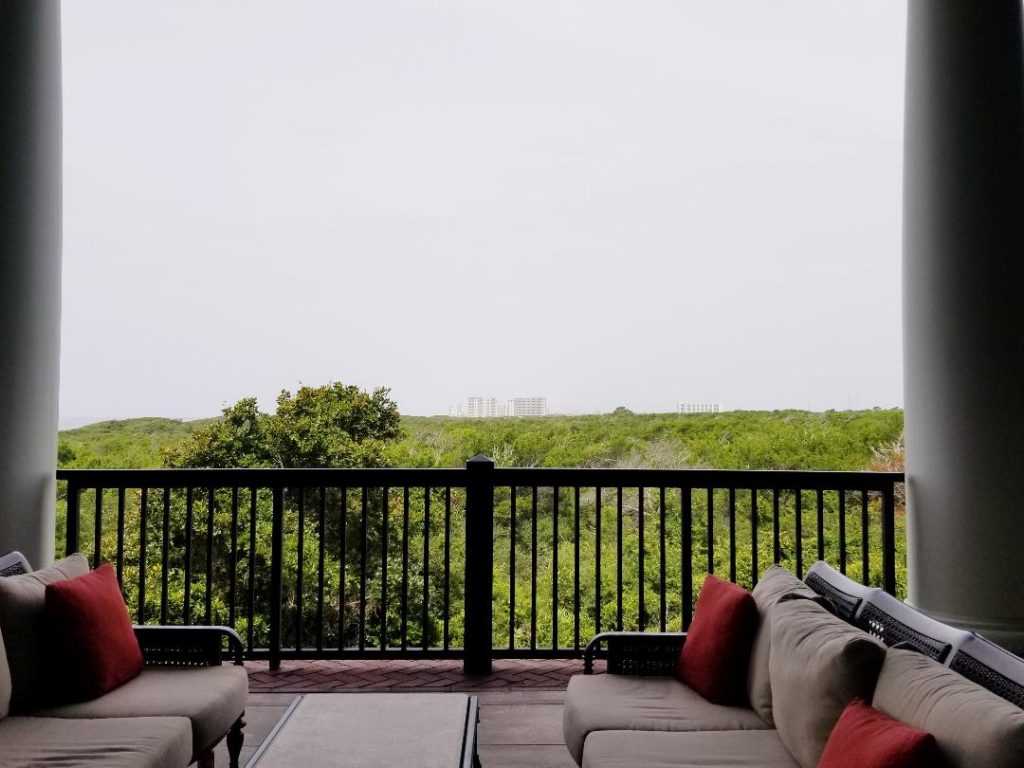 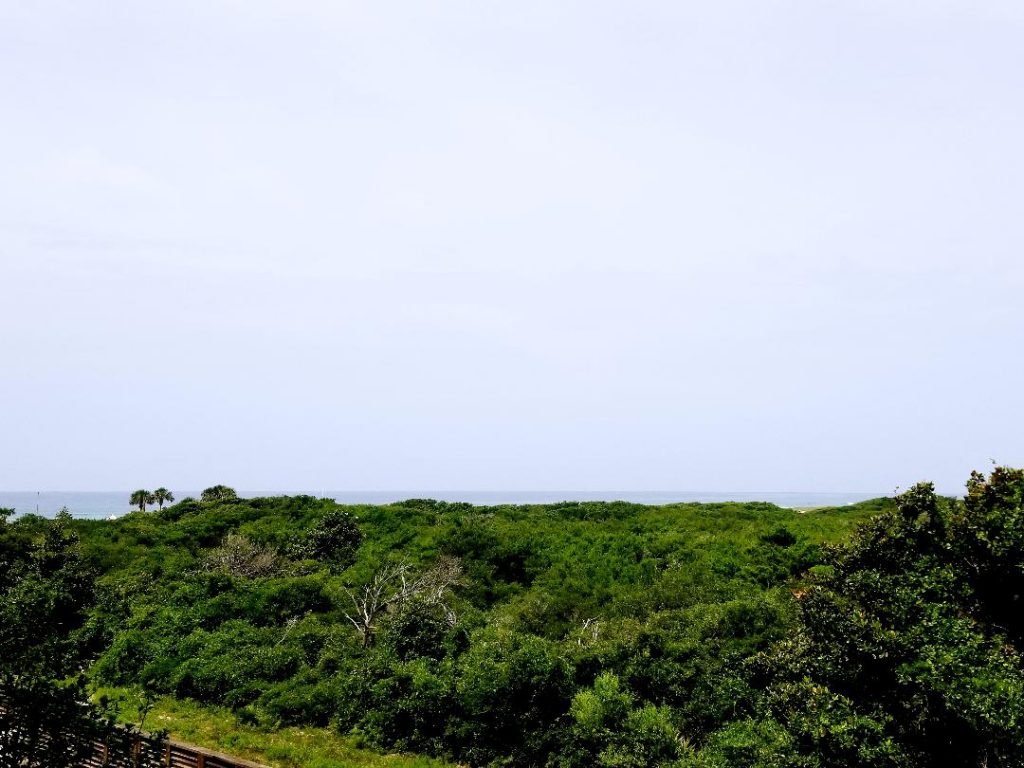 At 4:00 p.m. each day, family activities such as Badminton, Bocce, Corn Hole, Family Trivia, and beach volleyball are held on the grand lawn (see picture below), the beach, or near the family pool. Family crafts, which include magnet painting, canvas painting, and rock painting are held at 2:00 p.m.  Each guest at the Henderson can enjoy kayaks, boogie boards, paddle boards, and bike cruisers, which are included in the resort fee.  Children 15 and under must be accompanied by an adult for the water activities. 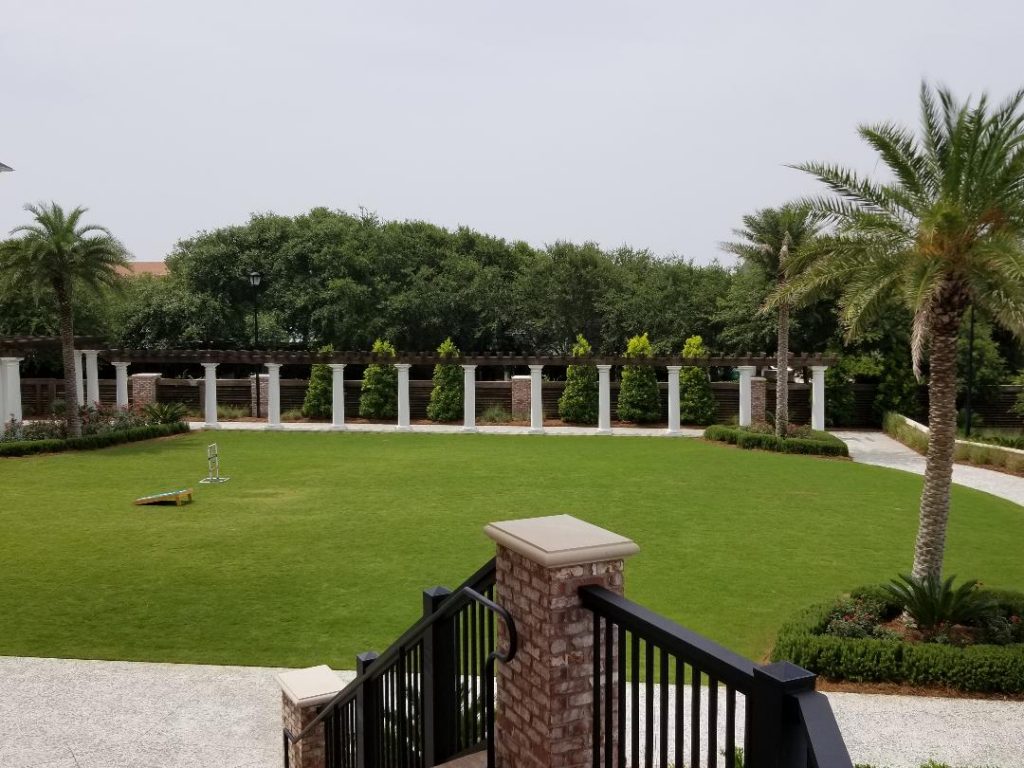 The only concern I had before going to the Henderson was the fact that the hotel is not directly on the beach.  However, the beach is not far from the hotel.

Once you pass the family pool, you arrive at a cross walk. 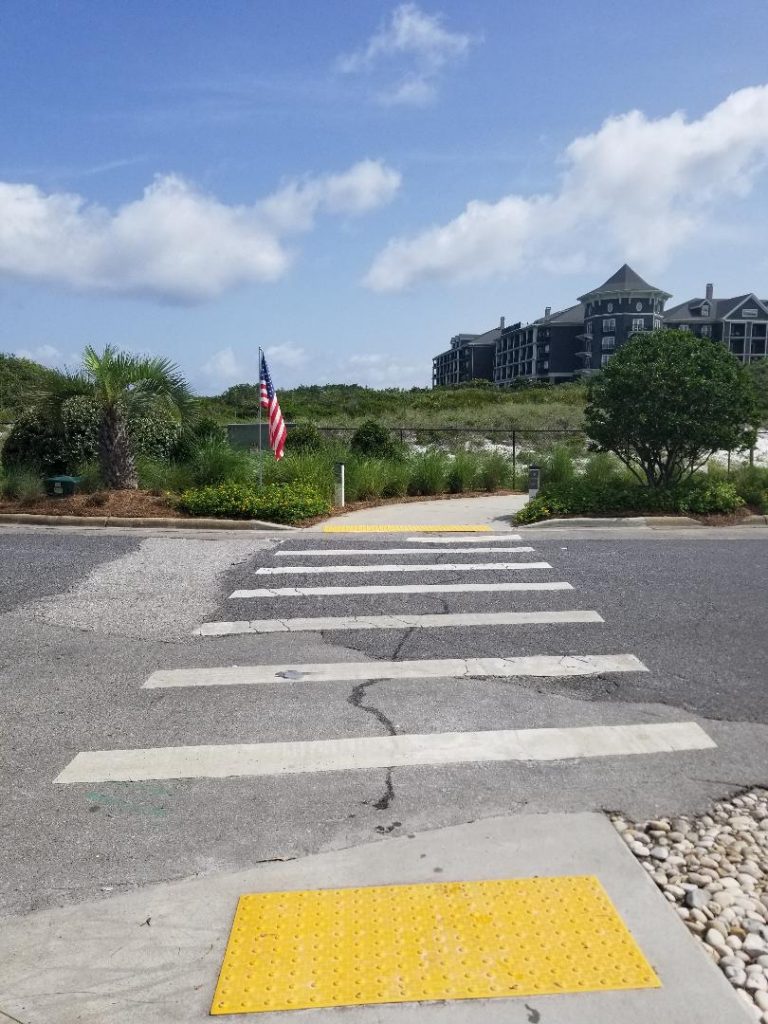 The crosswalk crosses in a cul de sac, but there is no one on the street. The area is not busy (see cul de sac below), and I didn’t have to worry about traffic with the kids in tow. 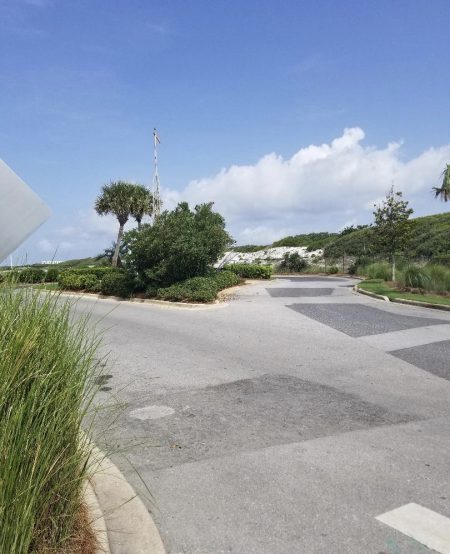 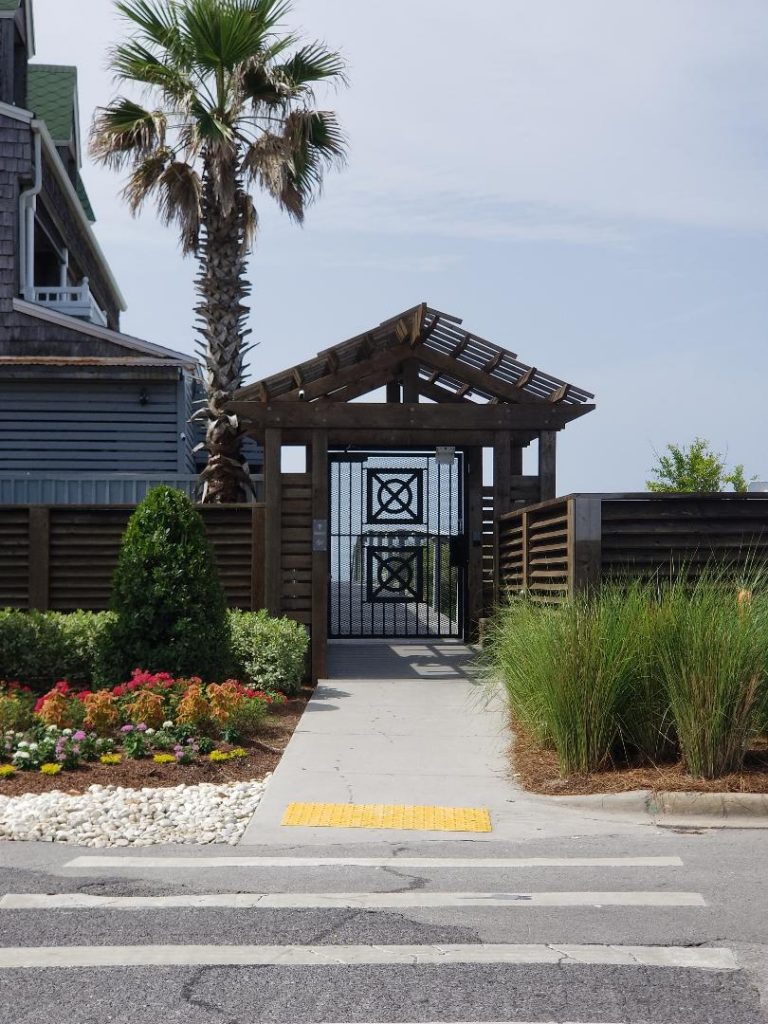 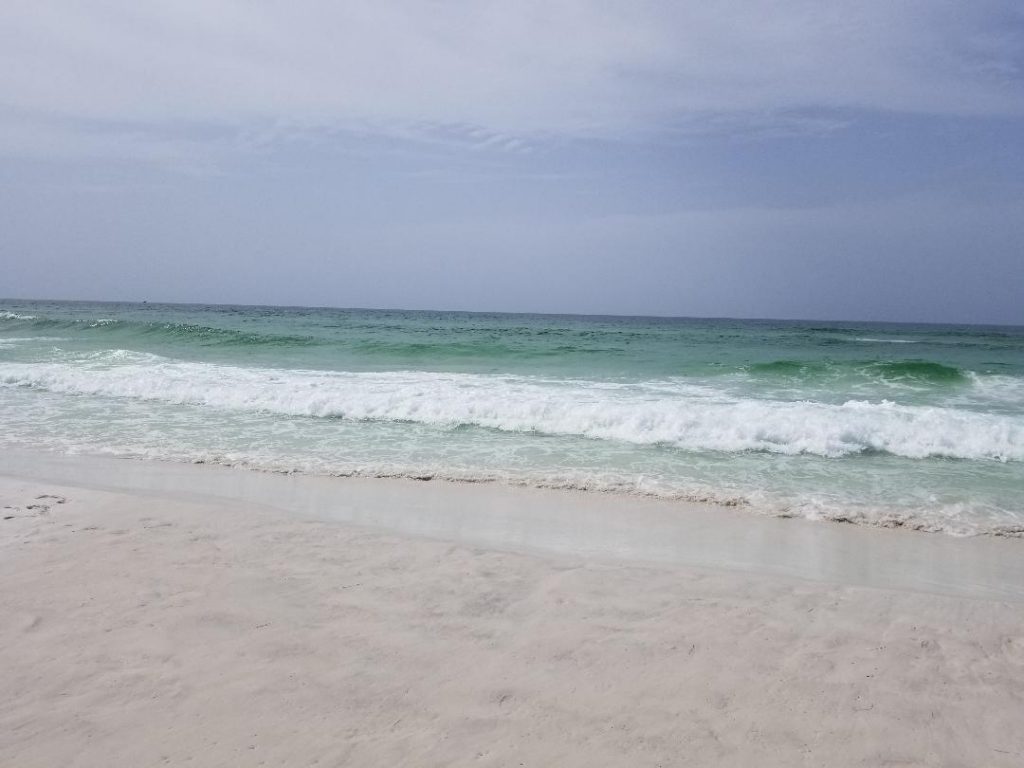 If you dread the combination of kids and public restrooms, you know the experience all too well — having your kids use the restroom before you leave home, only to have them ask to use the public restroom in the establishment where you are eating, visiting, etc. only a few minutes later.  Well, Nyla asked to use the restroom, and I dreaded the walk to the restroom.  The restroom is on the beach and is attached to the Beachside Bar and Grill.  We walked in, and I swear, it looked like we were the first people to use it.  There was no water or sand on the floor, no garbage in the trash, and everything had been wiped down and cleaned meticulously. As we exited the restroom, one of the attendants greeted us at the door and apparently went in immediately to clean the restroom and empty the garbage.  I was in love!!!!  Ironically, my friend who told me about the hotel raved about the restrooms. LOL!  I did not visit the Henderson due to the cleanliness of the restrooms, but clean restrooms are always “a plus,” and clean restrooms make me happy.  They really do. 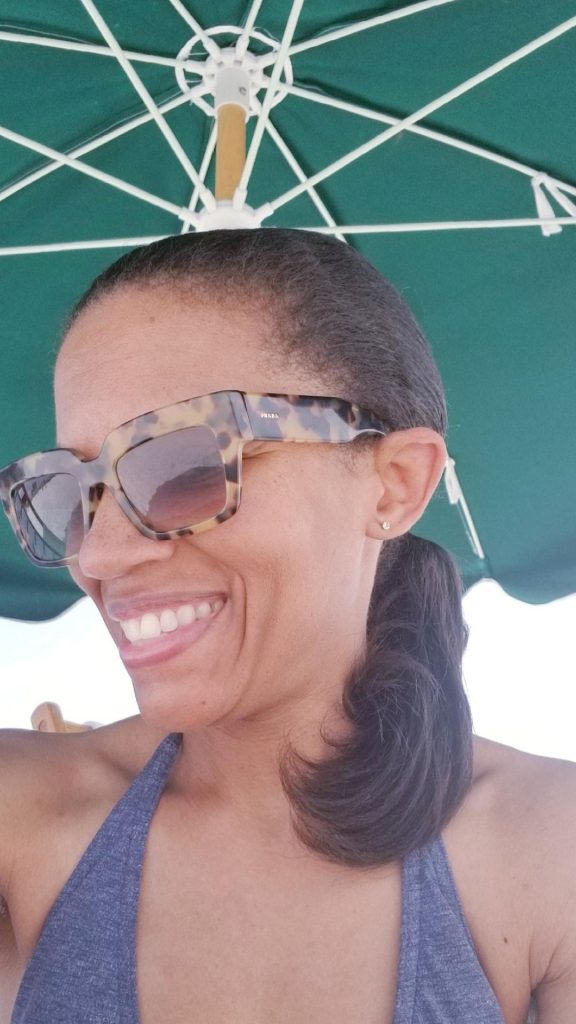 Attendants also walk the beach taking orders for food from the Beachside Bar and Grill.  If you want a quick bite, you don’t have to leave your seat, and you can enjoy your food beachside.

The picture of Matt with the kids was taken on Father’s Day.  We spent that morning on the beach. There is so much for the kids to do. They have an ice-cream shop with candy and treats for the kids.  There’s also Poppy Kids’ Club for children.  Poppy’s offers Secret Agent Training, Sports Madness, Pirates Palace, and Under the Sea themed activities.  Lunch and a craft are included.  Children must be ages 4-11 to participate, and there is a fee per child.  You have to reserve these activities at least 24 hours in advance to guarantee participation.  A Kids’ Night Out is also offered Friday through Sunday.  They offered dinner, a craft, and Out of Space, Lego Night, and Camping themed activities.  This is definitely a family friendly hotel, which is something we always look for when deciding on a hotel. 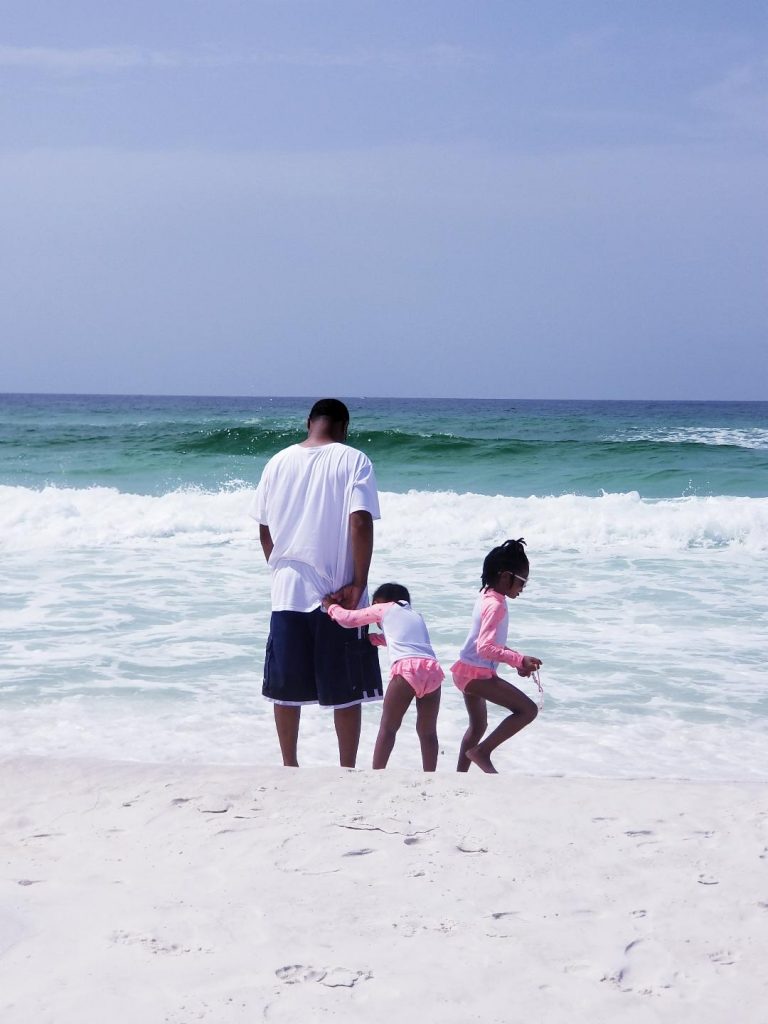 SJ collects rocks — yes, rocks. At the entrance of the hotel, they have huge planters that contain white rocks that look like they have glitter on them.  SJ spotted the rocks and immediately wanted one.  It was late and I was in a hurry to get inside, so I told her to put it down.  The bellman overheard our conversation, and the next night, this was in our room. 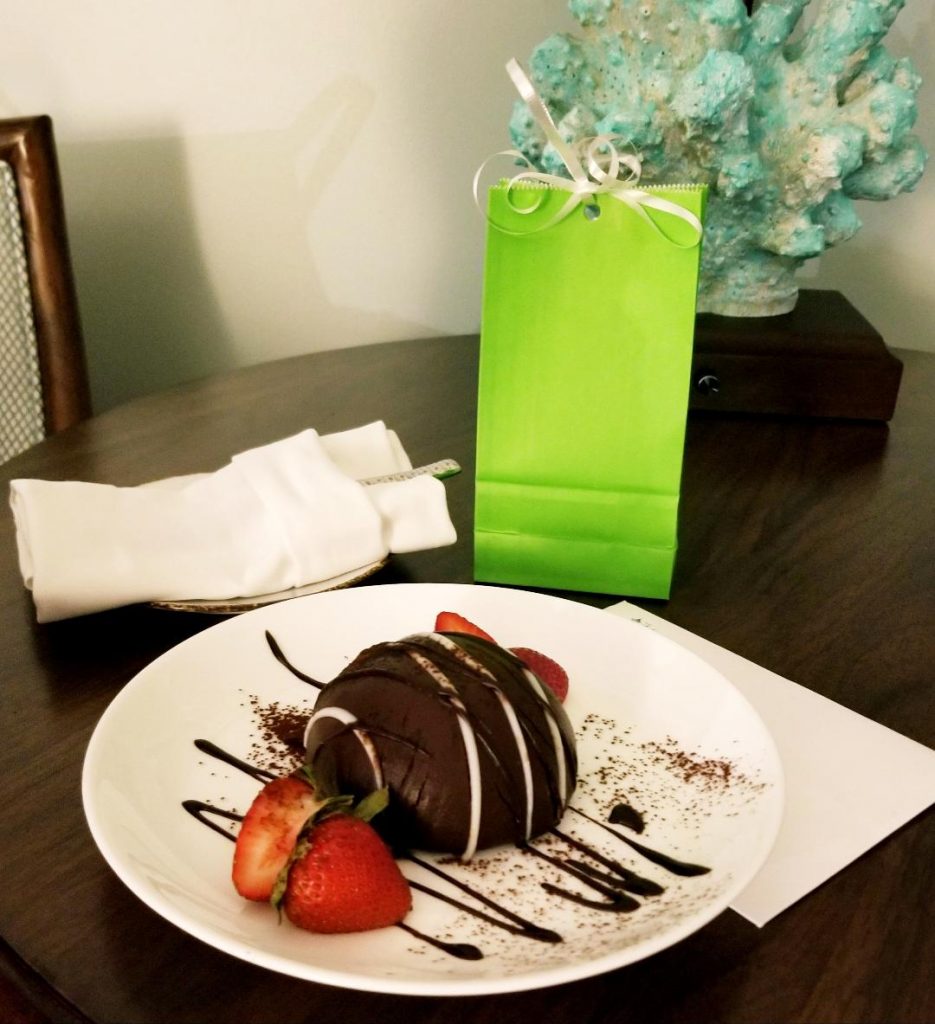 The green bag contained the white glitter rock she found outdoors the night before.  Well, she ended up with two white rocks because I did not know the bellman from the night before would send a rock to SJ.  I asked another bellman the following day to pick a rock and we had it wrapped in the gift shop, along with some other little items I purchased for the girls.   By the way, if you visit the resort, you have to visit Ms. Susan in the boutique.  She is a Mississippi Delta girl from Clarksdale, Mississippi.  She laughed when I told her I grew up right down the road in Ruleville, Mississippi.  It’s a small world.  That’s why you should treat everyone with respect.  You never know who you might run into!

When we returned for the night, the hotel had turned back the sheets, and the boutique had wrapped the kids’ gifts and placed them on their beds. There was also a sweet note wishing SJ a happy birthday. 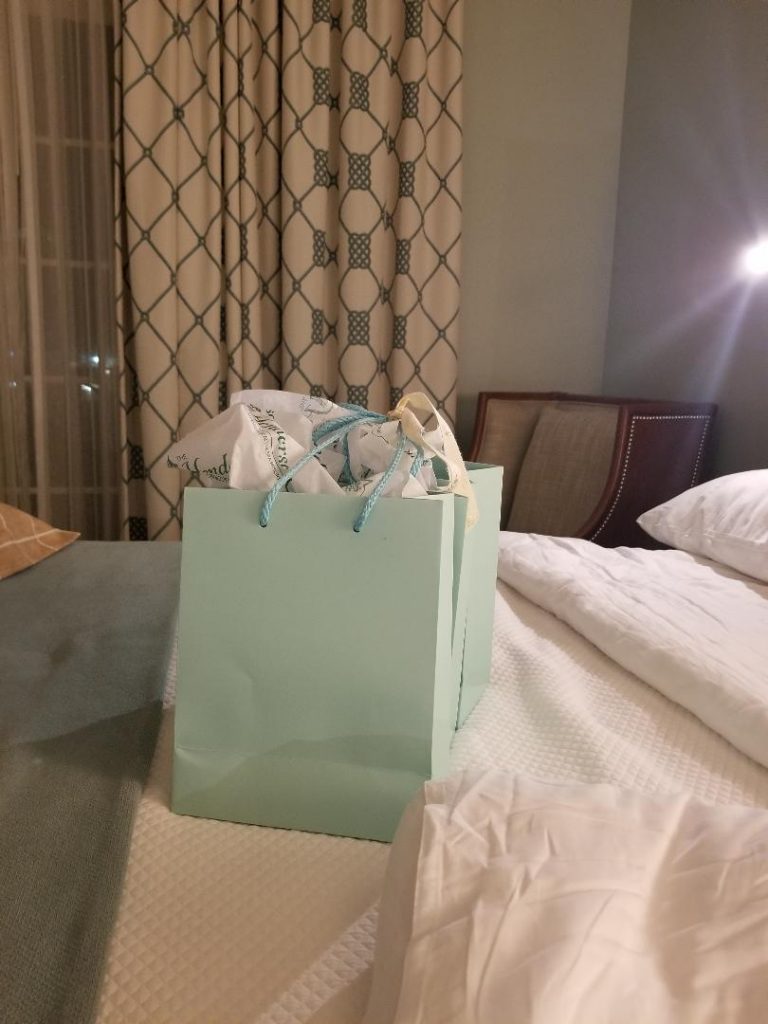 One of the rocks from the bellman 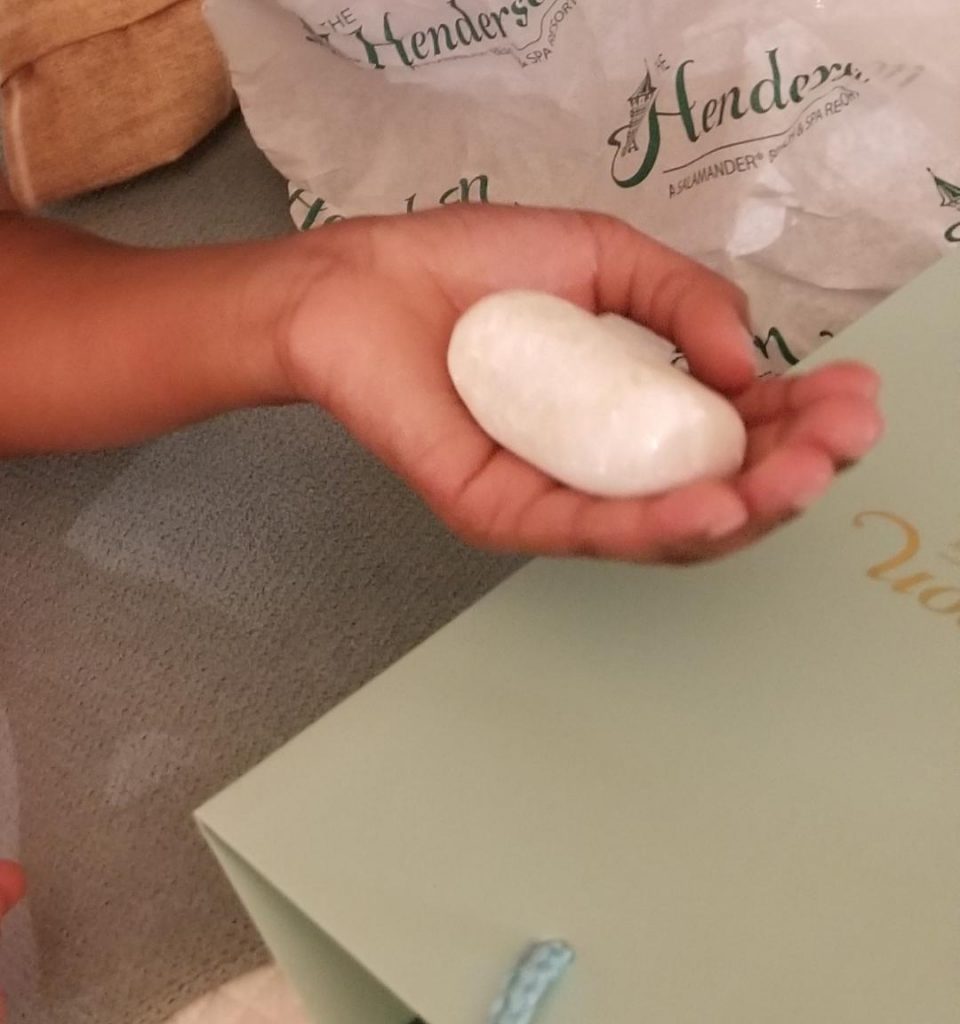 Little “happies” from the gift shop 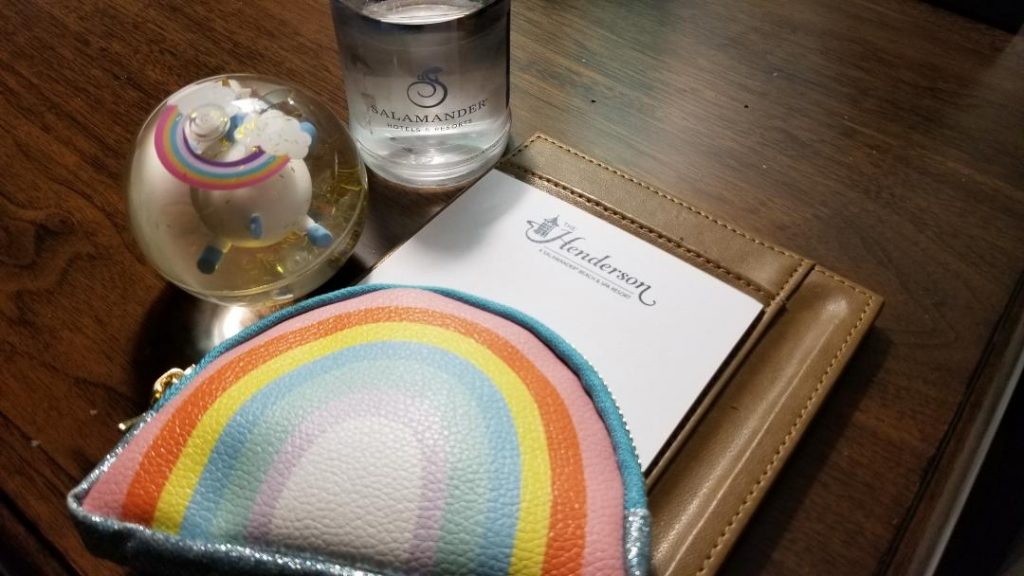 I can truly say this hotel exceeded my expectations.  If you’re in Destin and you want to stay in a beautiful hotel that offers everything, stay at the Henderson Beach Resort.  If your kids have fall break in October, consider visiting this resort.  The weather will still be beautiful and I promise you will enjoy your stay.

This is a great article on Sheila Johnson’s venture as hotelier if you’d like to read more about her accomplishments and philanthropic efforts.  Until next time…