On Tuesday, my husband and I went to the doctor for an ultrasound.  Before my husband and I walked in, I gave the technician two envelopes and two pieces of paper.  I advised her to let us know when she began looking for the gender of the baby so that we could turn our heads and not know the gender.  Well, several minutes later, she says, “Okay, that’s it!”  She printed out some pictures for us and my husband and I looked puzzled.  “Did you check the baby’s gender?” I asked.  “Yes, I’m writing it down now,” she laughed.  I couldn’t believe I had missed it.  I thought I would have at least been able to tell what we were having if she had been focusing on the baby’s gender.  Well, apparently she has the skill to see what we can’t see.

Matt and I kept one envelope with the results and sent the other envelope to the baker to bake a cake for our Gender Reveal Party.  I have been riding around in my car with one of the tightly sealed envelopes on the seat next to me since Tuesday.  I don’t want to keep it in the house because I am so tempted to rip it open everyday.  Well, I can’t wait until our Gender Reveal Party on Sunday.  We’re so excited!

Before I go, I wanted to share three of the most popular gender myths that I have been reading about in my doctor’s book, Hands Off My Belly, by Shawn A Tassone, MD and Kathryn M. Landherr, MD.   Have a great weekend, and I will let you know how the gender party goes next week! 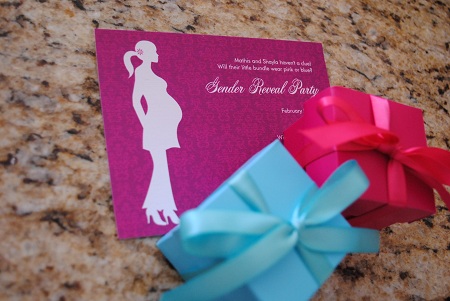 1. Faster hair growth means you will have a boy.   The hair growth myth has always baffled me, but it usually deals with how much hair the woman grows on her head during pregnancy.  The book explains that during pregnancy, due to the changes in levels of different hormones in your bloodstream, more of your hair follicles get “stuck” in the resting phase for a longer duration.  This causes less hair to fall out while you are pregnant, thus causing it to look fuller.  In other words, hair that you would normally have lost during pregnancy tends to stay put, making it seem like you actually have more hair.  After delivery, this resting phase shortens, giving the impression that you are losing your hair, when in reality you are losing the hair that would have come out normally if you were not pregnant.

Most women blame hair loss on the medications received during delivery, but apparently that is not true.  Nature is just taking its course.

2. If you carry the baby high, then you’re having a boy, and if you are carrying the baby low, you are having a girl.  Several of my friends have been victims of their parents and grandparents giving them this advice.  The factors that affect how the uterus sits in the pelvis are fetal size, maternal height, maternal weight, pelvic bony structure, position of the uterus and the number of babies in the uterus.  The baby’s gender does not determine how you carry the baby.

3. If the fetal heart rate is below 140 beats per minute, it’s a boy; if it’s above 140, it’s a girl.  I have actually been told this by my aunt.  We both laughed when she told me this.  Statistically speaking, studies show no significant difference between a male and a female heart rate.