It’s 3:00 a.m. on Sunday morning and I cannot sleep.  Sleeping on my stomach is uncomfortable, sleeping on my back is a pregnancy no-no, and I am tired of sleeping on my side. As I tossed the covers back and put on my slippers, I began to think about the New Orleans Saints and their nail biting performance on Saturday against San Francisco.  Why am I thinking about the Saints at 3:00 a.m.? I don’t know, but I thought long and hard enough to begin writing this post diligently during the early morning hours.  I jokingly shared with some friends that my husband disappeared soon after the Saints’ loss to the 49ers and went into the bathroom to cry.  No, he wasn’t actually crying, but I know he wanted the Saints to win.  Ironically, I think the Saints’ loss had as much of an effect on me as it did on my husband.  My husband is a loyal Saints fan.  His loyalty runs long and deep.  He had season tickets when very few people believed in them, when men and women wore paper bags over their heads to the games and referred to the Saints as the “Aints”, and when nobody could see a winning team in sight.

My Saints jersey from long ago. 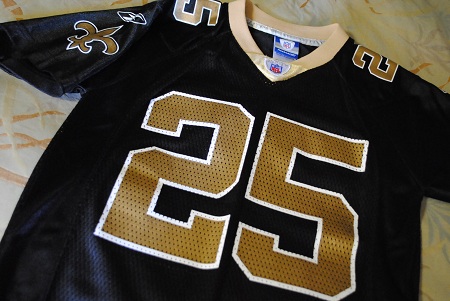 During Saturday’s game against the 49ers, I tried to stay calm, and during each turnover, I must admit that I became discouraged.  My husband  was literally pacing the floor and assuring himself, “That’s okay. We’re going to make this next play.”  He believed in them even when it looked hopeless, and he even boosted my spirit throughout the game.

People think Saints fans are fanatics and extreme, but it’s not just about the Saints.  It’s about the passion the players have for the game and for the people.  If you don’t know the history of the Saints, what they have been through and how far they have come, you will never understand why our loyalty to this team runs so deep.  This team truly represents the City of New Orleans and the hardship that they have endured. You might think you know, but do you really know about the Saints?

I remember standing in the kitchen watching television one evening as my husband sat at the bar.  I was watching The Voice when my favorite contestant, Javier Colon, began singing a song entitled, “Fix You.”  I thought the song was melancholy and wondered why they chose that song for him to sing.  My husband immediately put aside whatever he was doing and became fixed on the television.  “Do you know that song?” he asked.  “No,” I replied.  “That’s a song I will always remember because it reminds me of the Saints,” he said.  He then showed me the following video.

You see, during Hurricane Katrina, the New Orleans Super Dome was a symbol of sadness and despair.  Many who had lost their homes during the August 29, 2005 flood were taken to the Super Dome, which also had extensive damage from the storm.  The Saints no longer had a home. They would begin their first four games of the the season in Tiger Stadium at LSU.  The Saints completed their season in Texas, away from the fans they knew so well.  I, along with many others, sat on the edge of my seat, wondering abut the fate of the Saints.  There were talks of the Saints moving to San Antonio. New Orleans mayor, Ray Nagin, said that moving the Saints in the wake of Hurricane Katrina was a shameful act of disrespect to fans who supported the franchise for nearly four decades.  The Saints were no longer playing in the city they knew. Texas was not their home, and we wanted them back.  Even the NFL knew that the Saints needed to be in New Orleans, especially during this time when their fans needed them most.

In 2006, the Saints came back to the Super Dome to fans who welcomed them with open arms. Sean Payton was ready to get going for the season and Drew Brees was ready to defy the odds.  It’s so amazing that the Saints would pick the most unlikely person to shock the nation.  Drew Brees was told that he was too short and too slow, but the Saints saw something in him and he proved the naysayers wrong.  The Saints saw something in Brees, who underwent surgery to repair his right throwing shoulder in early 2006.  The Saints went on to win the division that year and made it to their first NFC Championship Game.  Three years later, the Saints finished 13-3 and won Super Bowl XLIV over the Indianapolis Colts.

I wonder where the people were who wore the brown paper bags over their heads to the games for so many seasons in the past?  Notice that I did not refer to them as “fans.”  They’re what I refer to as “groupies.”  Fans are there when things are not so great, yet groupies like to hang around only when there is excitement and the circumstances are favorable.  There’s a distinct difference between the two.  Were our paper bag attendees back in the stands cheering the Saints on when they won the Super Bowl and the NFC Championship?  Had they decided that their tickets were now worth something since the Saints were a winning team?  Did they have a sudden change of heart?

You can say what you want about the Saints.  Although you might not be a loyal Saints fan, you have to be blind to not acknowledge the fact that this team is a team of passion, a team that deserves loyal fans, and a team that never turned its back on the people who cheered them on from the beginning.  That is something you undeniably have to admit.  Loyalty runs deep, and I am a loyal Saints fan!  Until next season … Geaux Saints!  It goes without saying that you had a great year and you made us proud! 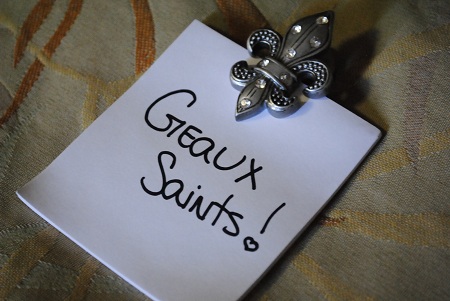